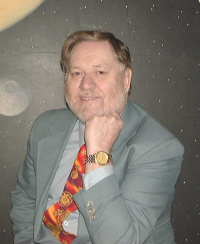 Alphee Lavoie, C.A., NCGR Level IV, Counseling & Rectification For the past 40 years Alphee Lavoie has earned his living solely on his skill as a successful, full time, counseling astrologer. He is currently seeing clients for full length readings (natal and predictive) as well as horary readings, electional charts and chart rectification services. He has been an innovator in the field of astrology with his successful teaching, counseling, lecturing, writing and development of software for astrologers. His reputation as a Master Astrologer has touched people on every continent around the globe and many of his referrals are professional astrologers themselves seeking his advice. Today his international expertise is well noted in the areas of weather forecasting and financial astrology.

Alphee is a dynamic speaker and has lectured all over the world for local, national and international organizations. He has repeatedly lectured at UAC, NORWAC, NCGR national and local conferences, ISAR, AFA, ASTRO-ECONOMICS, and many, many more worldwide conferences. His lectures have also been taken abroad to Russia, United Kingdom, Canada, Australia and Singapore. Alphee’s outstanding achievements for almost 40 years and his passion for sharing the wealth of insight and knowledge that astrology offers makes him a Complete Astrologer, respected and admired by everyone everywhere he goes. He has authored two best selling books, Horary Lectures and Lose This Book…and Find It Through Horary and has two more books on the way. His monthly Horary Astrology column can be read in Dell Horoscope. In spite of this busy schedule, he still finds time to be the Research Director Chairman for the Nation Council of Geocosmic Research. In 1995-97 he was the NCGR’s chairman of Fund Raising and created their first book to dovetail with their NCGR Certification, entitled, The Essentials of Intermediate Astrology. During that same time period he was also the Education Liaison for the Astrological Federation of Astrologer’s Network, AFAN, and designed and created their website. Alphee is also quite a celebrity, frequently appearing on national networks and in the summer of 1999 appeared on CNN with his incredibly accurate Stock Market forecasts. His AIR Software company, now celebrating 20 years of success, has become one of the top three best software companies in the world.