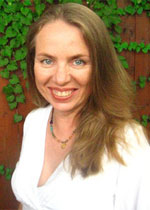 Noren-Hoshal is an evolutionary astrologer based in Baltimore, Maryland. She became interested in sacred practices of indigenous cultures through growing up overseas in Latin America and Egypt between the ages of 7 and 21. She teaches an astrological internship program via Skype and publishes an in-depth astrology column. Kari is Director of Programming and Media for the White Bison Association, headed by Cynthia Hart-Button, which cares for the world’s only herd of White Buffalo in Bend, Oregon. Among their spiritual education workshops, the White Bison Association offers a yearly Spirit Quest Workshop over Summer Solstice weekend. Kari has presented her views on astrology at national and international astrology conferences such as UAC, NORWAC,The River of Stars and Evolutionary Astrology Network and at NCGR Chapters in the Mid Atlantic region of the U.S. Kari is the V.P. for programming of the Baltimore Astrological Society. She is on the web at www.visionquestastrology.com . Contact her at karinorenhoshal@aol.com and 410-662-4676.